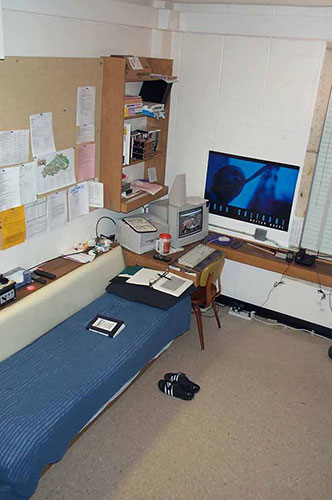 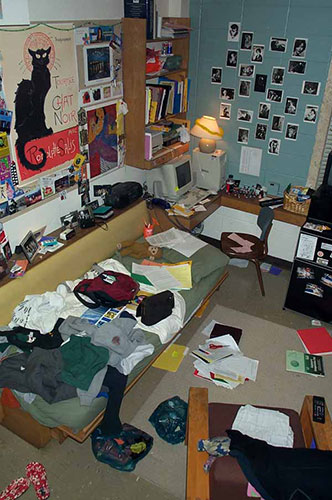 A Room With A Cue

My research is based on the hypothesis that the environments individuals craft around themselves, such as offices and bedrooms, are rich with information about the occupants’ personalities, abilities, values, and lifestyles. It seems likely, for example, that the pictures a person selects to hang on her walls, the books she chooses to read, and the way she arranges the items that fill the space around her all reflect aspects of her personality and values. Observers use information in personal environments to form impressions about occupants. Some of these impressions may be accurate and others may not.

Interactionist theories (e.g., Buss, 1987; Snyder & Ickes, 1985) suggest that individuals select and create their social environments (e.g., friendships, social activities) to match and reinforce their dispositions, preferences, attitudes, and self-views; extraverts choose friends, colleagues, and relationship partners who enable them to express their extraverted nature. We propose that individuals also select and craft physical environments that reflect and reinforce who they are.

My collaborators and I articulated a model explaining how individuals can impact the environment around them and, in turn, how physical environments can serve as repositories of individual expression (Gosling, Ko, Mannarelli, & Morris, 2002).

Our model was formulated in the context of personal environments, however it can be applied to other contexts of social perception. For example, an individual’s physical appearance may hold many clues to what he or she is like; hairstyle and clothing can be used to make identity claims, and clothing and accessories can provide evidence of past or anticipated behaviors. As in rooms, observers may use this information to form impressions about individuals. Indeed, many elements of an individual’s appearance may be crafted precisely to influence others’ perceptions (Goffman, 1959).

OUR ASSESSMENT TEAM IN ACTION

Our empirical research has focused on impressions of occupants based on their bedrooms and offices. Our findings, which varied slightly across contexts (offices and bedrooms) and traits, suggest that personal environments elicit similar impressions (i.e., consensus) from independent observers, that observer impressions show some accuracy, and that observers rely on valid cues in the rooms to form impressions of occupants. Findings also suggest that sex and race stereotypes partially mediate observer consensus and accuracy. Perceptions based on personal environments generally elicited stronger consensus and accuracy correlations than found in zero-acquaintance research.